The Wrong Fuel Rescue guide to the Toyota RAV4 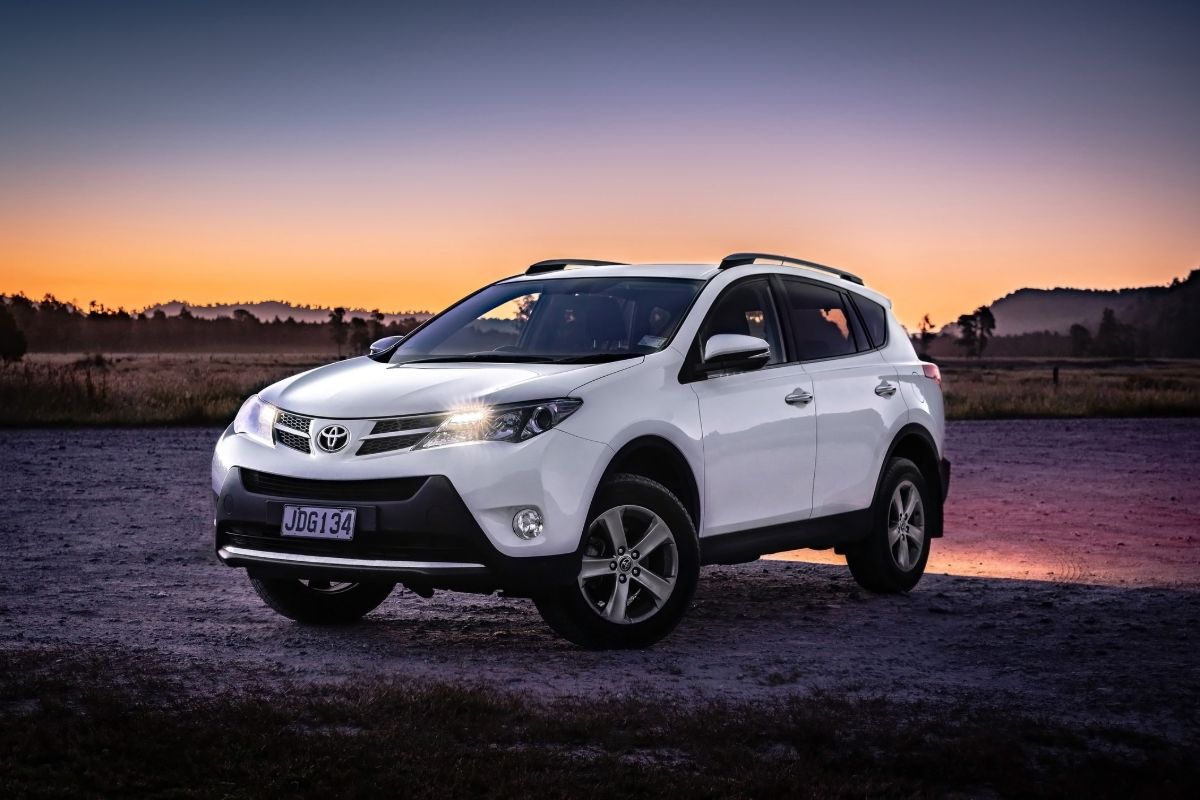 Lifting up the hood of the RAV4, you will find a 203-horsepower, 2.5 litre, 4-cylinder engine, which provides more motive force than is found in most compact SUV crossovers. With smooth acceleration and automatic transmission, and a fuel tank capacity of 55 litres, it makes for an enjoyable and fuel-efficient ride – no matter your destination. All RAV4 engines manage a high output as well as enviable combustion efficiency due to the Variable Valve Timing-intelligent system, which controls the combustion gases, fuel, intake of fresh air and consequently adjusts the timing of the valves in order to match the operating conditions of the engine. This ensures an enhanced driving experience.

Those interested in this vehicle have a choice between a 6-speed manual, a Continuously Variable Transmission (CVT) or alternatively an 8-speed automatic transmission. The manual version offers an Intelligent Manual Transmission, which allows drivers a stress-free experience since it automatically adjusts engine revolutions when gears are changed in order to prevent jolts during up or downshifts. The Continuously Variable Transmission (CVT) version is gearless and belt-driven and operates smoothly in the background to increase driver comfort as well as fuel efficiency. The 8-speed automatic transmission model is a breeze to use, making for faster and flawless shifting between gears.

When it comes to the TRD Off-Road model, owners will be excited to know that the vehicle features a Dynamic Torque Vectoring all-wheel-drive system as well as a Multi-terrain Select traction system to help you through the toughest of driving conditions. The Off-Road model also features the hill descent control system, all-terrain tyres, 8.6 inches of ground clearance as well as the TRD-tuned suspension. All of these features help this model to conquer trails and paths that most other SUV crossovers could never hope to tackle.

The latest RAV4 models sport what we at Wrong Fuel Rescue believe to be a more assertive and rugged exterior than previous generations of the vehicle. Bold forms combined with hard angles, as well as a vastly contemporary look are a few characteristics one picks up when confronted with the RAV4. Moreover, there is the influence of SUV-style cladding that has made an appearance – replacing the softer curves of previous RAV4 models. The 2020 RAV4 TRD Off-Road model goes even further in toughening up the vehicle’s looks – featuring stark black wheels and tires suitable for all types of terrain.

The Wrong Fuel Rescue guide to the inside of the RAV4

The 2019 model of the RAV4 saw a massive improvement in the vehicle’s interior materials and overall design. The updates resulted in a cabin that is soft to the touch in all the right places. Many argue that the cabin’s design emphasises the idea of function over form, since it showcases the same resolution as the vehicle’s exterior. When it comes to the TRD Off-Road model, those climbing inside the vehicle will immediately marvel at the red contrast stitching and embroidered insignias that can be found on the amazingly comfortable SofTex leatherette seats.

Perhaps one of the most exciting features for the driver is the RAV4’s 8-way power adjustable seat – which allows for the discovery of the optimal driving position. Featuring thigh support and adequate bolstering, there is little doubt that those embarking on long journeys will remain comfortable throughout the drive. In the back, there is plenty leg room for any long-legged passengers or restless kids, and passengers can enjoy handy rear air conditioning vents to keep them cool even during the hottest of days. Further, there will be no scramble to use charging points at the helm of the vehicle, seeing as the space features dual USB charging ports in the rear.

On the topic of hot conditions, one need only hear about the RAV4’S climate control system to know that the interior of the car will remain a paradise no matter the weather outside. With only a few simple buttons and knobs, drivers can utilise the vehicle’s dual-zone automatic climate control system that makes for the perfect conditions. It is incredibly easy to adjust and set the temperature within this vehicle.

Storage and space in the RAV4

The many storage compartments within the vehicle are a reflection of Toyota’s forward thinking. Busy families or individuals with excess every-day items will be happy to know that there are a wide variety of nooks and crannies within the RAV4. Particularly noteworthy is the shelf that runs almost the entire width of the vehicle’s dashboard. The perfect spot for a cell phone can be found atop the innovative wireless charging pad in front of the gear selector.

While relatively moderate in size, the centre console bin is the perfect spot for storing any loose items that are too important to lose. Behind the vehicle’s rear seats, one can find exactly 37.6 cubic feet of cargo volume. Should you decide to fold the seats down, 69.8 cubic feet of cargo volume will become available to you. These figures are highly competitive when it comes to the world of compact SUVs.

Many have described the RAV4’s new multimedia system as having perfect “attention to detail,” and we at Wrong Fuel Rescue feel no differently. The system is known as Entune 3.0, and features a 7-inch touchscreen which accommodates Apple CarPlay as well as Amazon Alexa connectivity. Should you wish to upgrade to an 8-inch touchscreen display, the option is most certainly available. Another available upgrade includes a satellite radio and navigation.

The tablet-style system is high-mounted and has a crystal-clear, responsive screen with easy-to-use tuning and volume knobs. Many happy drivers have commented that these dials are noteworthy since they have a quality, solid heft and are ringed with rubber to make for an incredibly pleasant grip and tuning experience. Some other features up for grabs are:

Safety features in the Toyota RAV4

We at Wrong Fuel Rescue believe in the necessity of modern safety features in vehicles. The RAV4 is a stellar example of the advances of safety equipment and features in vehicles. Many RAV4 owners believe that visibility and safety take first place in their favourite aspects of ownership. It is not too difficult to understand why. Thanks to features like the side mirrors mounted on the doors, outward visibility is phenomenal. The position of the mirrors allows for better sightlines to the front corners of the SUV. The set of sizeable windows also significantly aid visibility.

We have already discussed the dynamic nature of the vehicle’s 360-degree camera system that is an excellent addition to the safety features. Equipped in every model since the Toyota RAV4 2020 release is the Safety Sense 2.0 suite that features advanced driver assistance systems. Included in the system is an adaptive cruise control, a forward-collision warning featuring cyclist and pedestrian detection, lane-departure warning and lane-keeping assistance as well as automatic emergency breaking.

Newer models of this vehicle also feature automatic high beams as well as a new and intriguing road assist system which is capable of identifying road signs and accordingly warn the driver depending on the nature of the sign. The vehicle also boasts a rear cross-traffic alert and a blind spot monitor. With the above safety measures in mind, it makes sense that so many drivers feel that their own, and their family’s safety while driving has been placed at the forefront of the vehicle’s design.

The vehicle is also equipped with curtain shield airbags as well as a driver knee airbag. The safety of children in the vehicle has also been considered in depth – showcased in the child-lock function that has been integrated into the rear doors. Further, the vehicle features 2 ISOFIX approved infant-set restraint anchors on the rear seat in order to assist parents or guardians in their efforts to secure a baby seat within the vehicle. The RAV4’s doors lock automatically at a certain deriving speed, and the front seatbelts are expertly equipped with pretensioners and force limiters.

Pretensioners function by retracting some of the webbing of the seatbelt at the very instant that a crash occurs in order to keep occupants in a more confined position to avoid injury from being thrown about in a severe or moderate frontal crash. Force limiters work to reduce the force of the seatbelt above a specific threshold. Working together with the airbags and tensioners, the risk of upper body injuries caused to front passengers is decreased.

The RAV4 was awarded a 5-star rating for its ability to protect passengers in the case of a crash from relevant institutions. The Insurance Institute for Highway Safety awarded the RAV4 with a Top Safety Pick Designation. In light of the above features and many, many more – we at Wrong Fuel Rescue have great confidence in the safety of the Toyota RAV4 in all its recent models. On the matter of security, RAV4 owners can rest easy when they park on their adventures with the knowledge that an alarm, immobiliser and wireless door lock with Smart Entry are working to keep the vehicle secure until their return.

No matter how much we prepare, adventures sometimes go awry – especially those involving long and exhausting road trips. It is surprisingly easy to zone out and choose the wrong fuel for your vehicle, which leads to a plethora of issues and ultimately – the side of the road. Not to worry if this unfortunate circumstance happens to you, however, as we at Wrong Fuel Rescue are always here to sort out the mistake and get you back on the road as soon as possible.

Should you fail to realise a fuel mishap at a filling station, there are several indicators that will undoubtedly make you aware that something is amiss in your Toyota RAV4, and any other vehicle for that matter.

If you have put petrol in your diesel Toyota RAV4 you may notice:

If you have put diesel into your petrol Toyota RAV4 some of the things you may notice include:

Do not panic if any of the above occurs, as we at Wrong Fuel Rescue are experienced professionals who are keyed up on how to help you get back on the road as soon as possible. If you find that you are in need of a Wrong Fuel Rescue, do not hesitate to contact us immediately.