The Wrong Fuel Rescue guide to the Subaru Forester 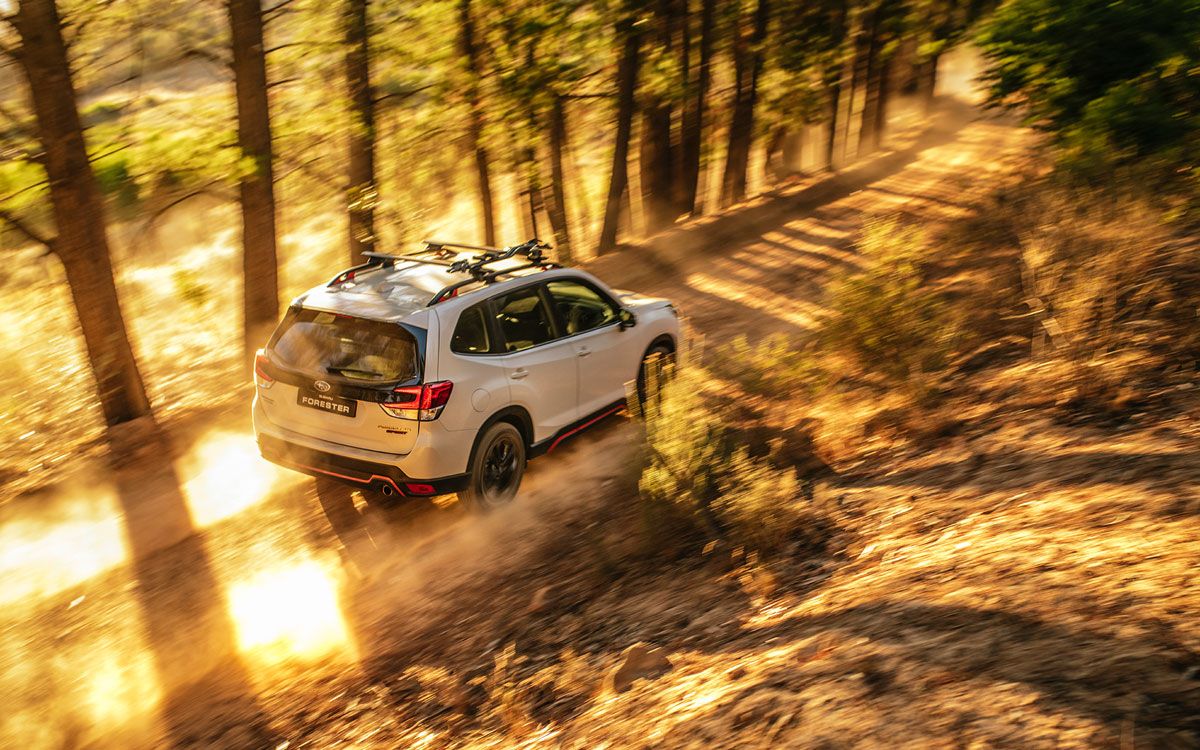 The Subaru Forester is the perfect combination of practicality and power. A comfortable and agile family vehicle, and one that boasts competitive performance capabilities. Read the Wrong Fuel Rescue guide to the Subaru Forester for a run-through on what driver’s can expect from this vehicle, including power, impressive technological features and high safety levels.

The Wrong Fuel Rescue guide to the Subaru Forester’s performance

When you pick out a Subaru Forester you will be choosing between direct injection 2.0-litre and 2.5-litre Boxer engines to power you through. Pair that with the lightweight Lineartronic CVT transmission with shift paddles behind the steering wheel and you’ve got yourself a cruiser that keeps focus on the road in front of you. The 2.0-litre engine will give you 115kW of power to work with, whereas stepping up to the 2.5-litre will bring this all the way up to 136kW.

Control and choice is what separates the Subaru Forester from competitors, as the Subaru Intelligent Drive function lets you choose between sport modes or something more comfortable for the family on a Sunday drive. The SI-Drive function will reorganise the mapping of the engine and redirect power where you need it, in the sport mode this means that the 2.5-litre Forester can go from a stop to 100 km/h in 9.3 seconds.This in no way means that Subaru has overlooked fuel efficiency and emissions as the 2.0-litre variant offers 7.6l/100km performance and 193g/km of CO2 emissions whereas the 2.5-litre still offers 8.3l/100km on the combined cycle, with a fuel tank capacity of 63 litres.

Subaru Foresters on the lower end of the price range come standard with high-quality, soft to the touch materials with a contrasted stitching throughout for a more aesthetic appeal, with higher end models offering a leather alternative. The Forester has increased cabin space compared to predecessors allowing for even more passenger comfort and leg room. To further this comfort, passengers in the back seat have their own air conditioning vents to control as well as USB points to charge their devices.

Passengers in the rear will now have access to pockets specifically designed to hold smartphones or tablets and the convenience continues as you move back. The boot has a low sill to assist with easy loading and unloading and the already immense 520-litre capacity can be further increased to 1770-litres by activating the appropriate switches, either on the top of the seats or on the side of the boot panel. Speed also helps in convenience and the 3-seconds it takes for the motorised bootlid to be raised or lowered stands out from competitors in this segment.

The S and ES variants of the Forester have an 8-inch touchscreen infotainment system in the front that is ready for whatever you throw at it as it is equipped with AUX, bluetooth connectivity and if your phone supports it, Apple CarPlay or Android Auto can be set up using the USB-A ports. If you reach a bit deeper into your pockets and purchase the ES or Sport variants of the Forester, the front seats will be electronically adjustable, you will have access to automatic climate control, a sunroof to really let the air in and wipers with rain-sensing technology. This is a vehicle that focuses on practicality without compromising on aesthetics or performance.

The Subaru Forester is equipped to tackle any weather or road condition with the use of the Symmetrical All-wheel Drive system as this calculates and distributes the optimal amount of power to give you the most traction and stability possible. The Forester has 220mm of ground clearance for rockier conditions and an advanced X-mode that comes with a hill descent control and settings for snow, dirt and mud. The X-mode further optimises the AWD system allowing you to get even more traction on wet and slippery surfaces and Active Torque Vectoring will give you more control and safety when taking sharp corners should you opt for it.

The Boxer engine of the Subaru Forester is placed deep and low in the engine bay which moves the vehicle’s centre of gravity, this allows for a smoother ride and more controlled handling. The new Forester comes equipped with steering responsive LED headlights so you can see where you’re going rather than just what’s in front of you, giving you more time to react to possible obstacles or difficult corners. Some extras included are high beam assist and a rear seatbelt reminder so you can keep everyone safe and where they need to be.

Technology and safety come together with many of the top of the range Forester features such as the Eyesight Driver Assist technology, a side view monitor when you need viewpoints that your mirror cannot offer, lane keep assist technology and reverse automatic braking for when you go into your garage with a heavy foot. The Eyesight Driver Assist system is there to give you extra eyes on the road and possible extra braking seconds in unpredictable traffic with features like the adaptive cruise control which monitors the vehicles ahead of you to adjust speed and make sure a safe following distance is always maintained.

There is also the pre-collision throttle management and braking systems, the braking system constantly monitors whether or not the vehicle in front of you has stopped unexpectedly and will warn you as well as begin applying pressure to the brake whereas the throttle management system is there for your off days and for instance, if the car is put into drive instead of reverse, the Forester will sense the wall in front of it and immediately cut power to the engine and avoid any dangerous mishaps.

The Wrong Fuel Rescue guide to the Subaru Forester’s safety

Safety is something that we at Wrong Fuel Rescue think should always be at the forefront of design, rather than an afterthought. This is what led Subaru to completely redesign the frame of the vehicle and to come back with the Ring-shaped Reinforcement frame which, through its engineering, is able to better disperse the energy created in a collision away from passengers or vital structural points. As mentioned, the engine is deep in the vehicle to move the centre of gravity but the gearbox has also been designed so that in the event of a frontal collision, both the engine and the gearbox will be pushed down and below the vehicle rather than into the cabin, endangering passengers.

To further protect precious cargo the interior is outfitted with 2 front airbags, 2 side airbags, 2 curtain airbags and a final airbag at the driver’s knee, totalling 7 throughout the cabin. To help prevent these collisions in the first place, the Forester cabin has been reshaped to allow for fewer blind spots than ever before and increased driver visibility. This is accomplished by making the A-pillars thinner than before and increasing the window surface area as well as redesigning the C-pillars to further increase the window size and visibility. The rear-view mirror is even fitted with an automatic tilt-down function when the reverse gear is engaged by the driver, meaning there are absolutely no distractions when your focus is needed.

Sensors placed in the rear of the vehicle act as extra eyes and will alert you to vehicles in your rear blind spots either when changing lanes or when someone comes out of nowhere in the parking lot. Lane departure and sway warning systems are integrated to ensure the safest experience when on highways. If you begin to drift in your lane and into another, the EyeSight system will detect the lane markers and chime to alert you of the deviation.

Whether you’re a seasoned driver or you’ve only recently hit the roads, the reality is that mistakes do happen and on occasion, you may accidentally add the wrong fuel type to your vehicle. The Subaru Forester used to be available in both petrol and diesel, but the diesel option was discontinued in 2018, paving the way for the Hybrid rendition. It would be understandable if Forester drivers were to get the two confused, especially if you have just got the vehicle and aren’t familiar with the fuel type specifications.

Adding the wrong fuel to any vehicle can cause damage to the engine and can disrupt your plans for the day. Some people add the wrong fuel to their vehicles when they are filling up at a service station that they aren’t familiar with and they can’t decipher what the different coloured nozzles on the fuel mean, or if they’re simply distracted and aren’t paying attention to the fuel types. Adding the wrong fuel is also common in instances where people often drive two different vehicles, such as a personal and work vehicle, and then they confuse which fuel type is for which vehicle.

At Wrong Fuel Rescue, we recommend keeping an eye out for the following, which are indicators that you have incorrectly added diesel into your petrol Subaru Forester:

If you have a Subaru Forester that you purchased a few years ago there is a possibility that it could have a diesel engine and not a petrol engine. If you have accidentally added petrol to your diesel Forester, then you may notice a few of the following:

Whether you’ve added diesel to your petrol engine or petrol to your diesel engine, it is not a scenario that you will be able to solve yourself. Instead, you should pull the vehicle over (if you managed to start it) and switch the engine off. Then, give Wrong Fuel Rescue a call and wait for our timely mobile service to meet you at your location. At Wrong Fuel Rescue we have assisted thousands of Australian drivers and our team has the necessary experience to ensure that your vehicle is rescued after a wrong fuel scenario, getting both you and your Subaru Forester back on the road.