Petrol in a Diesel Car

Putting petrol in a diesel car is a common mistake and in 99.9% of situations is able to be fixed. It appears to be the more common mistake than diesel in petrol cars. We would assume that this is because unfortunately the petrol nozzle is able to fit into the fuel filler neck.

Whilst putting petrol in a diesel car may be the result of being new to the vehicle or simply being distracted while filling up, knowing what to do in this situation is vital for your safety and can also save you thousands in repair bills.

Although the mistake is fixable, it should be known that there are some serious issues that can arise out of putting petrol into diesel vehicles.

First and foremost is your safety and the people around you. Petrol is extremely flammable, so we would encourage you to avoid handling. Secondly, the petrol has the potential to cause serious damage to the fuel injection system and the engine, the resultant damage is not covered under warranty and insurance policies may not provide cover for the mistake.

My partner made the silly mistake of putting petrol in our diesel car and within the hour, wrong fuel rescue was with us at 10pm at night and had us ready to go for the next Morning. For something that could have cost thousands, this was the best service I could have asked for! Thanks so much!
Cassie May, Perth WA, Facebook Reviews

What happens if you put petrol in a diesel car?

Putting petrol in a diesel car can result in severe engine damage and should be rectified by a professional service as soon as possible. Adding petrol to diesel fuel creates a solvent that reduces lubrication and can cause critical damage to the fuel pump and associated fuel system.

What to do if you put petrol in a diesel car.

Do not start your engine if you accidentally put petrol in your diesel vehicle. It is important to not even place your key in the ignition as this can prime the fuel pump. You should contact a wrong fuel recovery service who will conduct a fuel drain and flush.

Diesel fuel pumps operate on very fine tolerance at high pressures and are lubricated by the diesel fuel. When petrol is added to diesel fuel, the mix acts as a solvent, reducing lubrication.

This can also cause damage to the fuel pump through metal-to-metal contact creating metal particles, which can cause significant damage to the rest of the fuel system. Serious engine damage may also occur due to detonation (knocking) caused by uncontrolled petrol ignition under a much higher compression pressure consistent with the diesel engine.

The further the petrol moves along your fuel system, the increased potential for a more expensive the repair bill. So, if you have already started driving, as soon as you realise you have contaminated your diesel with petrol STOP DRIVING and SWITCH OFF!

Our biggest word of advice is to always double check the fuel grade indicator on the pump before filling up.

Below are some indicators to be wary of that can increase the risk of mis-fueling;

PUT THE WRONG FUEL IN YOUR CAR?

DON'T PANIC, WE CAN HELP! 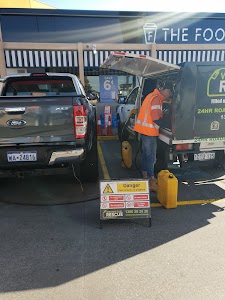 Shannon Smith
05:32 22 Sep 19
From the moment We rang to book in the job, Nathan arrived at my door step 25min later. This Was my 1st experience with “Wrong fuel rescue” and Nathan ensured that it was effortless... he was beyond helpful, full of knowledge, fast and efficient & incredibly kind. I would recommend this company as there services are fantastic and ther staff are an absolute delight to work with. Thank you so much Nathan

Phil Connew
04:42 22 Sep 19
Thanks, Steven for the great rescue mission you performed this morning. Great communication from the outset. I highly recommended this company. He explained everything well. The car's running perfectly. Cheers.

Ataahua Hapeta-Taereau
05:44 15 Sep 19
Had the worse day ever! Started that by putting over $70 of petrol in my diesel car! Only to realise this ONCE we have driven off and the car stopped working! I googled frantically, with heavy breath and stressed fingers! Thank god I found these guys! Who came within 30minutes and Simon was fantastic! Very calming, informative, & polite. It made the situation a lot more comforting. Such an easy mistake that’s costly, but wrong fuel rescue understood the financial stress and delivered a fixed price. I am beyond impressed and cannot praise enough. It was done within a hour. Don’t go anywhere else. These are your go-to guys.

Paul Ryan
08:56 14 Sep 19
Excellent service and very timely. Was able to relieve any stress and reassure no damage even though driven for 2km. Would highly recommend. Simon was excellent and was very efficient and reassuring. Also John was great on call centre. All my stress has gone. Cant thank you enough Simon.

Jacqui Pasquale
10:52 09 Aug 19
I couldn’t believe I put the wrong fuel in my car, a quick call to Wrong Fuel Rescue and all my worries were alleviated. Zane made his way to me and worked his magic and my car was as good as new. The service from my first call to when Zane saw me safely to a fuel station to refuel correctly was impeccable. I have no hesitation in recommending this professional and friendly business. I’m very grateful. Zane’s attention to safely should also be addressed. What a great service a big thumbs up from me. Thank you Zane for your efforts in getting me up and running again.
See All Reviews
1300 28 28 20
24/7 assistance hotline
FAQ'S